This plant is commonly called 'String of Pearls,' but SP says it looks like peas and I think that's a better name so String of Peas it is. It's Senecio rowleyanus (although my label read 'Senecio rowleyana, I wonder if someone wrote that incorrectly deliberately... assuming that Wikipedia has the correct name?)

Anyway, I came across a cheap little pot of the plant in the local Ikea (I do like them for their selection of cheap little house plants) and snapped it up on impulse. Fortunately, the web tells me it's relatively low care (though not NO care; I don't believe any plant ever really is). I've potted it up in another Ikea pot I've had floating around for a while. It did have a baby bromeliad slowly growing in it... and then the cat ate most of it and so I had to turf it out. The pot doesn't have great drainage - only a very small hole in the bottom - so I've filled the bottom inch with gravel, then potted up the plant in a mix if about 1/4 sand (borrowed from the retaining work D is doing out the back) and 3/4 ordinary potting mix. Cactus mix would have also been appropriate if I'd had any.
Let's hope the cat stays away from this one; the leaves are poisonous and not to be consumed. 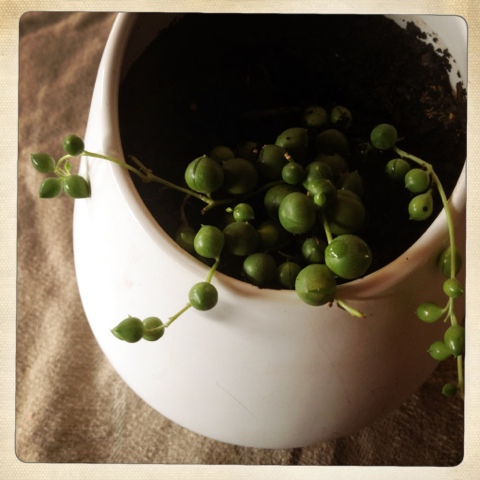 Purple and yellow and...?

It's nearly rose time. Nearly time to plant and nearly time to prune. I am a bit ahead of myself this year, because Babe #2 is due when all this should be happening so I'm quite keen to get things done before s/he arrives and I am pinned to the couch for the next six months.
I made myself a short-list of roses that I'm interested in (all climbers, this time). I couldn't help noticing that SP has annointed it with her own ideas... Is that a 'no' to Tess of the D'Ubervilles, or a 'yes,' I wonder? 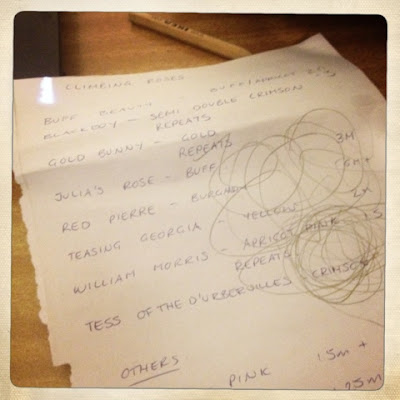 Now, I have this section of front garden along the eastern fence, which looks endlessly crappy. The soil is particularly rubbish (sandy, water repellant, and dry dry dry), and the heat from the sun in the west over summer fries everything when it reflects off the fence. When we first bought our house I planted a banana passionfruit here. There's an old post here, when I was still optimistic it would work out! Anyway, the vine grew but never especially well. It never had a single flower, and obviously never any fruit! So, this week I pulled it out. Bang. Gone. Poor bugger, but them's the breaks.

(This shot is post-passionfruit removal, but before I'd done anything else) 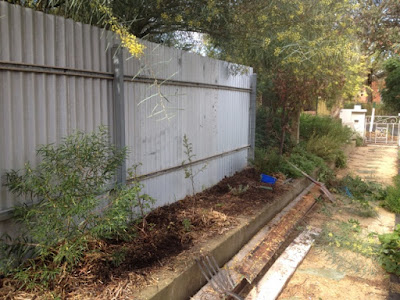 I still want a garden bed along this fence and I have two main issues to address: the heat and the soil. For the heat - and I'm reeeeally hoping this works - I put beige-coloured shade-cloth along the fence, thinking that beige would be the least conspicuous. Then I stepped back and thought, 'Good Gods, that looks awful!' 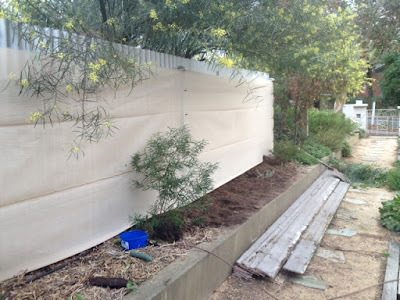 But, fortunately, looking at that section from further away it doesn't seem quite so bad, a bit shielded by the little ornamental plum tree (reddish brown tree) and the Acacia iteaphyllas on the neighbour's side of the fence (very pretty yellow shrub/small tree, terrible invasive weed in the Adelaide Hills, and many other regions of Australia...) 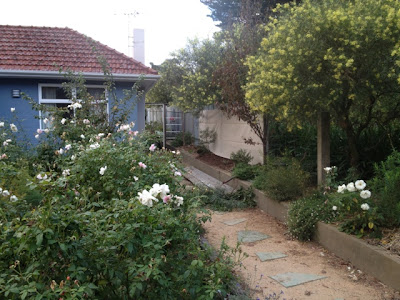 To help amend the soil I added several bags of neutral compost, most of a bag of cow manure and a few handfuls of Dynamic Lifter pellets. For good measure I found some worms in another area of the front garden and gave them a new home in here (a good indication of the poor nature of the soil: there were no worms at all!) 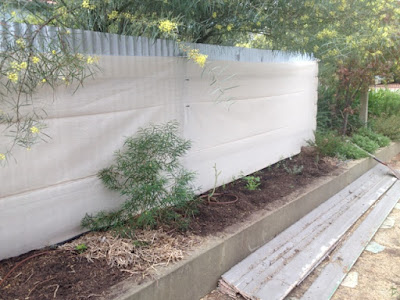 Then, to plants! Roses, obviously, where this disjointed post started. I want to put a small climbing rose at the bottom left of the photo, but which one, or what colour? That small shrub that I've left in place is a Myoporum batae, very pretty weeping plant which should make it to several meters tall (though I'll probably keep it smaller). Great plant for dodgy conditions. Next plant in line is a new Graham Thomas rose I couldn't resist getting from a Big Box hardware store. It's not strictly a climbing rose, but can get to over two meters tall and it's becoming one of my absolute favourites, see why? Man, I love that yellow...

(This is not my picture! I got it from here: http://placespill.blogspot.com.au/2013/05/graham-thomas.html) Next in line will be my Reine des Violettes, which I'm hoping will end up looking like this:

And that is the end of that space. Underneath there is currently a ground covering Eremophila 'Augusta Storm,' which I left because it was growing well and an Atriplex semibaccata (two more good plants for dodgy dry and hot conditions). I found some red 'Mrs Bradshaw' geums - my latest plant obsession' so I popped one of those in as an experiment, since I have no idea how they grow.  It's not a big space, really, but I'd like the purple and yellow roses to contrast (along with the mystery #3 rose... suggest colours/varieties to me! I'm leaning towards a red/crimson, maybe a Blackboy rose?)

Sometimes a plant just isn't happy. Take this little kaffir lime (Citrus hystrix):  Miserable; wonky in it's pot; losing it's leaves; covered in scale with accompanying ants. What to do? I had grand plans to plant it in our retaining beds (still being built right this minute, in fact, but that's another post) but it's so sad I wasn't sure it would be worth it. But I can't bear to turf out a plant - especially a relatively expensive one - on account of being a victim of neglect (probably never got enough sun; shouldn't have put that competitive rhubarb in there with it; not enough love AKA fertilizer and water etc). Some drastic measures are required. This may work, or it may not. 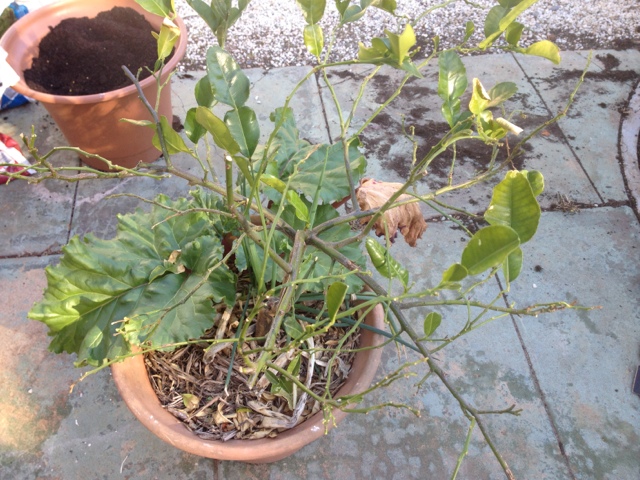 *
First: take a deep breath and lop off most of the branches: 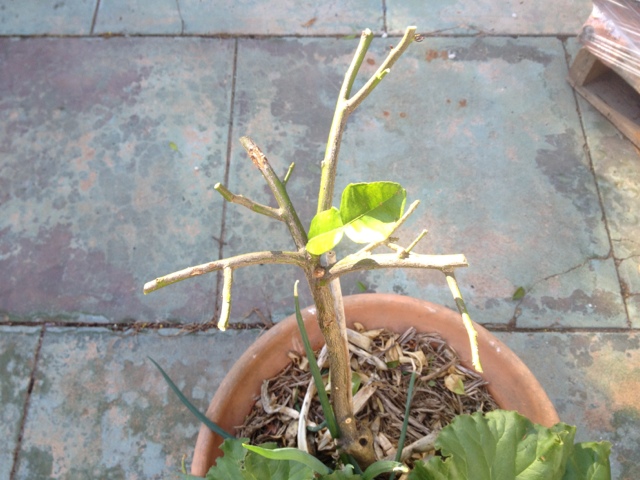 *
Second (no picture, had wet hands): Put the entire contents of the pot into a bath of lots of water with a big dash of seaweed extract (to help with transplant shock and root development). I used the wheelbarrow for this. Gently tease out the roots from the bulk of the soil. Express some horror that after nearly three years in the pot the roots have barely developed and are spiraled and twisted (this plant was bought before I knew anything much about gardening and I must have chosen a pot bound specimen). Cut off the worst of the twisted roots, and trim the remainder to a manageable length.
*
Third: repot the plant - straight this time! - into a bag of good quality potting mix and water the bejeezus out of it. Leave it with all the other pots so you don't forget to water it. 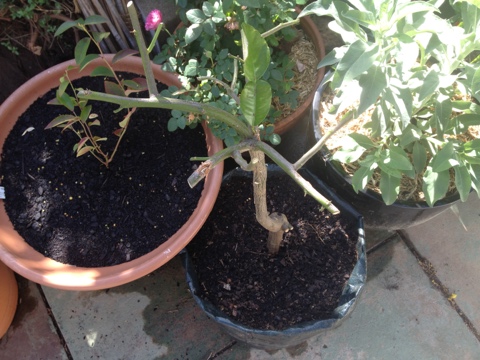 *
Fourth: Pray to whichever gardening Gods you choose that this will revitalize and refresh the tree and this will be successful. Or just wish it luck :)
*