Today is Winter Wednesday #11, as begun by Hazel, and so I stopped off by the side of the road on the way home to say hello to some old friends.

The wattles in this area started blooming weeks ago, but one in particular caught my attention: Acacia myrtifolia (myrtle wattle). She's a small shrubby plant with a profusion of lemon-yellow lopsided blooms. 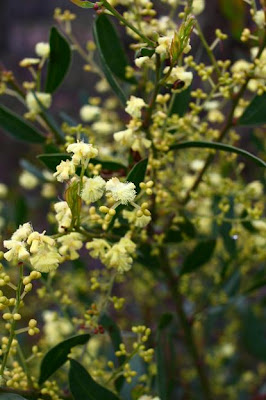 Her leaves are just as pretty as her flowers, and it's those strong leaf margins that make her easy to recognise. I'm going to plant her in my front garden soon. 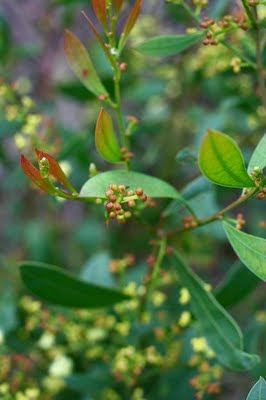 Overhead, alongside, and underneath and, well, everywhere really, is our golden emblem: Acacia pycnantha (golden wattle). He's looking a little bedraggled today, his fluffy pompoms reduced to limp balls by all the rain we've had in the last couple of days. 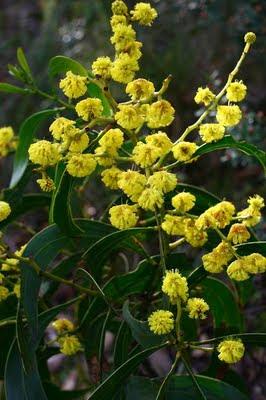 I found a lot of Hakea rostrata, the beaked hakea, with it's filamentous white flowers. You should look at the fruit shape to identify hakeas, but I didn't and am relying on the fact that this one has especially long leaves compared to the other local hakeas. 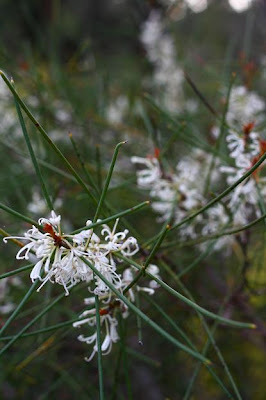 Pultenaea daphnoides is gearing up for a spectacular, if brief, spring show. Ah, my large-leafed bush-pea, I'm sorry I disliked you so much when I was writing half my thesis about you. It wasn't you, it was me. I was just miserable then but I'm over it now and I have realised that you are really quite nice and I am looking forward to your display in a few weeks time. 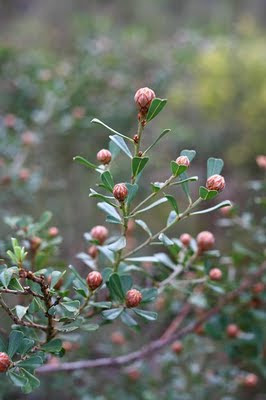 Pterostylis sp (greenhood orchid), my most favourite orchid in the world! I think he is Pterostylis nutans, the nodding greenhood, because he doesn't have any pixie ears sticking out the top like most of his relatives. We have these for sale at work, and I have been resisting buying one but I think it's only a matter of time before I cave in and get one. 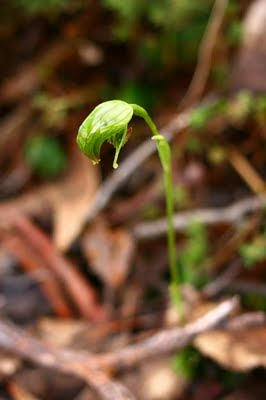 And nearby, a teeny-tiny maroon-coloured orchid cousin, one of the Acianthus species, possibly the mayfly orchid. 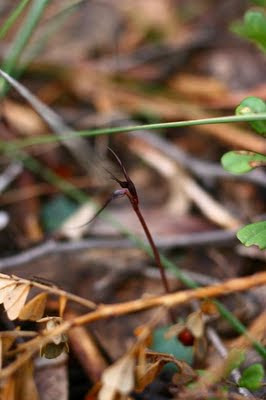 And another tiny favourite of mine, the little Drosera macrantha (climbing sundew) twinkling in the filtered sunlight. 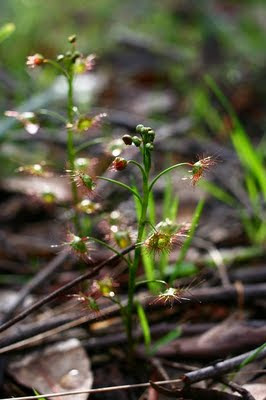 Something else a muted yellow? Creamy candles! Also known as Stackhousia monogyna. 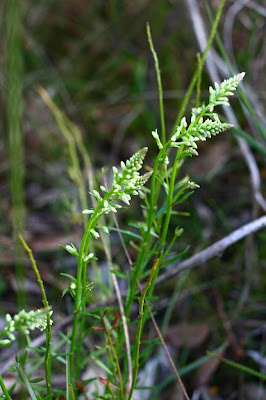 A pop, a flash of vermilion, and yet another favourite prickly plant of mine: Astroloma conostephoides, the flame heath. I think I just love the name As-tro-lo-ma. I asked at work if they ever had it for sale and all I got was laughter! Apparently it's very, very hard to propagate, which seems strange for a little plant you see everywhere in the hills. I guess nature still keeps some secrets from us. 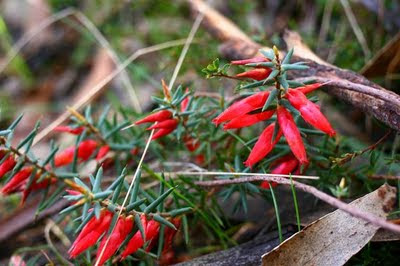 Dear hot pink Grevillea lavandulacea, did you know you are the only grevillea native to the Adelaide Hills? 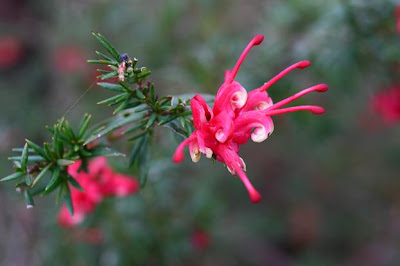 And the last of my local friends is some sort of rush, or reed, or something. I have no idea what this one is, but it's pretty cool in my opinion, its flowers arranged like beads on a string. 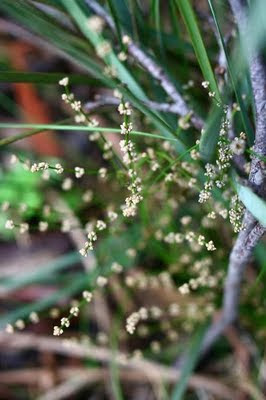 So next time you're driving along and you see what looks like it might be a decent bit of bushland, stop by the side of the road and have a look, there's all sorts of stuff in there and around about now, winter's end, it becomes especially special. 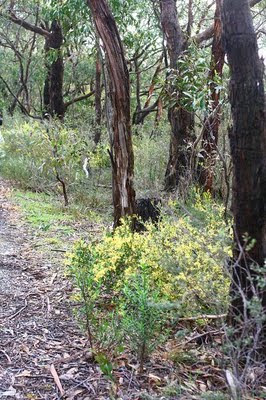 The other day I mentioned we had some good news, well, good news for us but very bad news indeed for the giant pine tree which hangs over our yard. Well, we've had permission from the council to remove it and got onto it straight away and off he goes! About halfway up is a guy dangling off a branch with nothing more than a yellow fluorescent visibility jacket and a couple of ropes to secure him as he chainsaws off the limbs (the tree's limbs, not his own, I trust!) The tree is so big they'll be back tomorrow to continue the job, and might even need a third day. Good thing it's a fixed price! What a difference it's going to make, the sunlight is going to flood into our yard after this, great news for my vegetable garden and fruit trees. 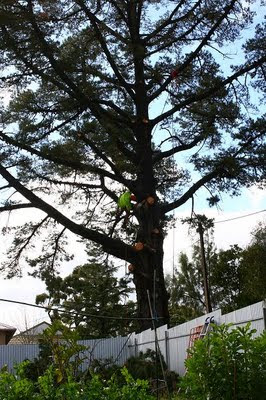 Thank you for giving me a lesson of Australian native plants. I really enjoy it since I am not familiar with it. Very pretty all of them. One day, I will like to add them in our garden as well.

Stunning photos! I love the Aussie natives (and what a find with the orchid!). Thanks for Rewinding x

I particularly loved the Pultenaea daphnoides. You can just sense that they are about to 'pop' into something beautiful. It's hard to capture potential in a photo but I really think that one has. Lovely!

Great to see all those natives looking happy! And I'd love to see pics of how your garden responds once the great garden thug has been cut down to size. Are you getting the timber from him?

Thank you for all the positive comments :)
No, we're not keeping the timber from the pine tree. I thought about keeping a few rounds to use as seats in the garden until it was pointed out to me that they'd break down relatively quickly once they were cut, and I considered asking to keep some of the chips for mulch too but I'm too paranoid about the way pine chips suck all the goodies out of the soil as they break down, so I've shut my eyes and bid it all goodbye!