I had the opportunity yesterday to have a bit of a potter in the vegie garden. I pulled out a few weeds, picked some Amish Paste tomatoes, and pulled out most of the daggy squash and zucchini plants. Plenty is still going on out there, even though the days are rapidly cooling and shortening.
My 'Yellow Patio Watermelon' has one lonely melon, but I am guarding it zealously and hoping like mad nothing happens to it before it ripens! It's about as long as my hand so far. 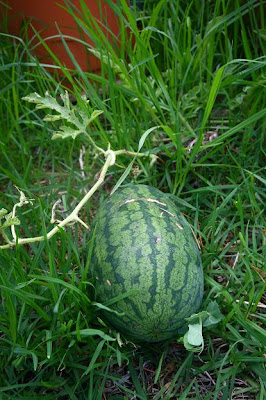 The Broccolini was ready to be picked so we sliced the tops off with a sharp knife. Three out of four plants produced lovely heads, though small. The fourth was totally insect infested and went straight to the compost heap. I left the plants in place to see if they'll do anything else. About a fortnight ago I also planted baby cauliflowers, some brussel sprouts, and more broccoli. I did have both broccoli and cauli seeds sown which had sprouted about a month ago, but they got frizzled off by a few very hot days. 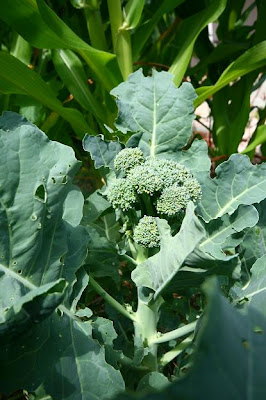 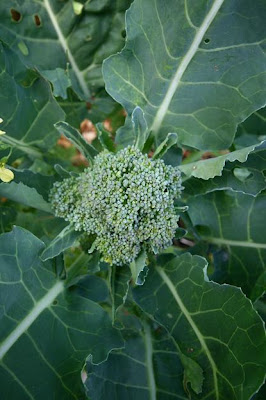 The pepino looks good. Nothing has tried to eat it yet! 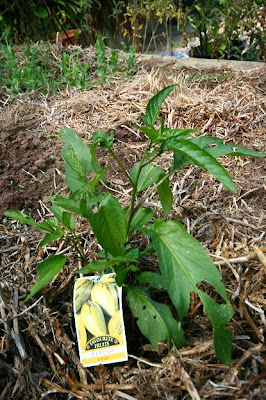 The pumpkins are a disappointment overall. I will have to try again next year. We have only one butternut pumpkin (Butternut squash for the rest of the world!) actually growing. A number of other pumpkins started and swelled a little, then fell off. Maybe I planted them too late? There did seem to be an awful lot of male flowers compared to female ones. 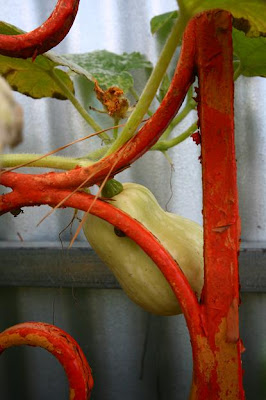 This pumpkin, which I must admit I can't remember the name off, still looks healthy and strong but considering how the rest of the pumpkins went I'm skeptical that any of the fruit will go beyond their current walnut size. 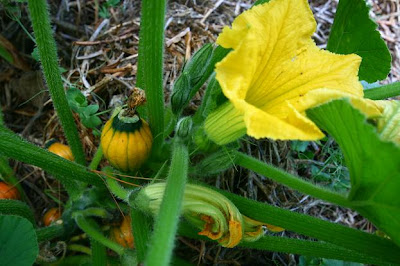 The other recent action in the vegie patch was green manure sowing. For the uninitiated, green manure crops are crops which are grown to add organic matter and nutrients to the soil. You sow plants like clover, beans, fenugreek etc, and you slash them down when they are still green and then mix them into the soil or use them as a mulch on top. They're something I've read quite a lot about but have never actually tried. I didn't have specific green manure mixes on hand at the time, but I did have fenugreek spice seeds from the supermarket which sprout very readily (in a day or two, in fact) which are legumes and will fix nitrogen (from the air to the soil). We can also eat the leaves as a herb. I also had half a packet of sprouting seeds (chick peas, mung beans and soy beans) from a very brief and unsuccessful foray into sprout growing which I scattered out there as well. A few weeks ago it looked like this: 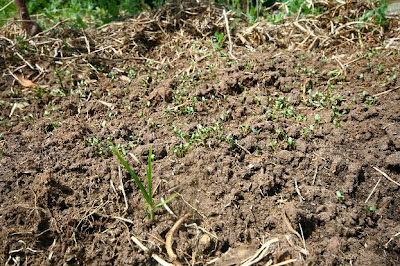 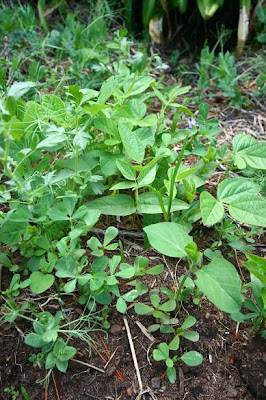 I've put patches of green manure throughout the entire vegetable garden and in the new garden bed I am still very slowly creating around it.
Posted by Katie M at 2:07 PM

Your plants are very healthy - you must have great soil in your garden.

Thank you Helen :) The soil's not bad, I was pleasantly surprised!